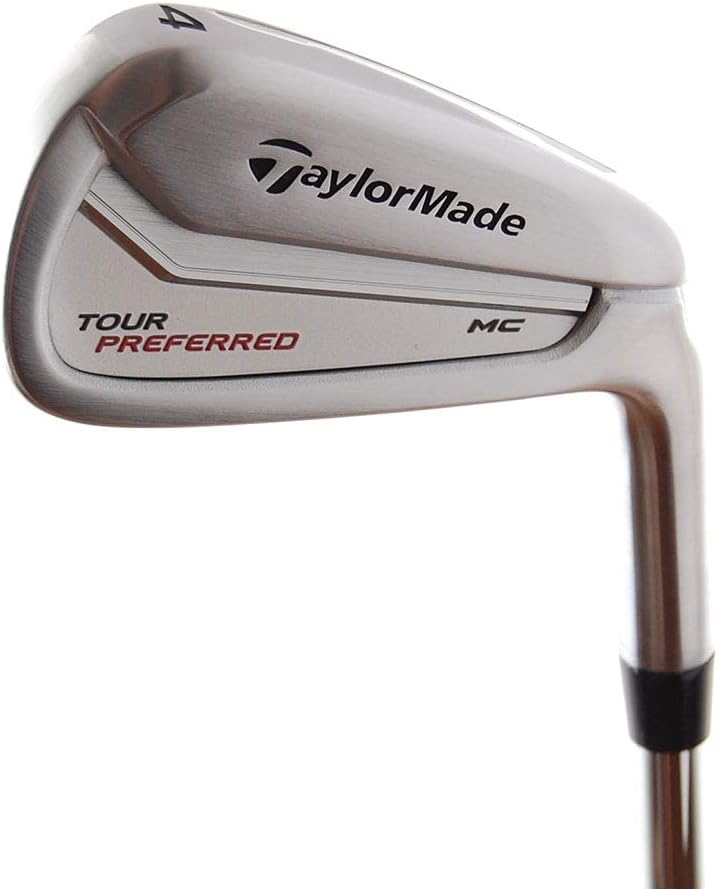 Irons Set is one of the indispensable parts of golfers’ bags.

One of the preferable irons brands is no other than TaylorMade.

This brand’s products have always affirmed their quality, proven by the long-standing reputation and the love of users.

As soon as they unveiled their Tour Preferred Series, it had been a craze among golf lovers.

All three line-ups in the series stand out for excellent performance, while each line is appropriate for a certain level.

Today, let us give you a closer look at the middle line in the series.

Let’s see what else it has to offer our players!

The 3-7 irons of the MC series incorporate Speed Pocket technology.

What is the Speed Pocket? You ask. Well, it’s the slot that runs behind the club-face.

The Speed Pocket allows the face to flex more and rebounds faster.

This high-tech feature helps get your ball to your target on miss-hits.

It gives you faster ball speed across the entire face and higher launch,

That’s why once you experience the power of the speed pocket, you’ll never play an iron without one again.

While 3-7 irons are cast from stainless steel, 8-9 irons and the pitching wedge are forged from 1025 carbon steel.

Most of the time, forged clubs often give a great feel.

Indeed, MC Irons win player’s hearts for the satisfying feeling without the loss of forgiveness, unlike other forged clubs.

Sure, we’ll get into this later.

The principal intention of grooves on club-faces is to give the ball a spin.

Technically, they also remove water and unwanted material from the club-face.

Each curve, line, and angular shape is measured throughout the manufacturing process for unprecedented accuracy and consistency.

The accurate construction of the cavity makes a combo of feel, workability, and stability.

As MC stands for “muscle cavity”, it’s an outstanding feature to enhance MOI (Moment Of Inertia).

To put simple, MOI is an indicator as to how forgiving a golf club could be.

If MOI is high, the club is more stable and more resistant to twisted ball flights.

Since the MC targets highly-skilled apprentices to professionals, it corporates a moderate degree of forgiveness.

The MC series aims to offer stiff irons for players advancing to the standard of expertise.

On the one hand, it delivers powerful performances on centered hits.

On the other hand, it adds forgiveness to more reduced strikes.

In short, it isn’t what an expert would use but a great help to upgrade a player’s level.

With that, it may require some practice to get familiar with distance gains.

But it’s nothing to worry about.

You can certainly pull it off with a few weeks of training.

Forgiveness is probably the most remarkable plus of this club.

Most often, forged clubs tend to be unforgiving.

Therefore, average players may struggle to handle this type of club.

However, thanks to the Speed Pocket and muscle cavity, the manufacturer managed to add forgiveness to the MC Irons.

And then, we have what they call a perfect “blend of feel, workability, and stability.”

In terms of beauty, the MC Irons most certainly occupy the No.1 spot out of the 3 Tour Preferred line-ups.

What makes the MC Irons so visually appealing?

MC Iron’s latest edition has a sleek and artsy vibe.

There has been significant improvement in designs for more attractiveness.

It’s because the 5 -Step net forging technique and cutting-edge design build up a polished head.

Also, the sharp lines establish an elegant look, plus a professional impression.

When we come down to the feel that MC Irons bring to players, there’s little to complain.

Indeed, the feel of the club can’t even satisfy fastidious players.

This shaft empowers maximum control and precision for the game.

How does it compare to others?

Unlike the MC – a mixed set of forged and cast irons, the MB is an all-forged iron set.

For that reason, it doesn’t have the Speed Pocket Technology.

If you’re looking for something more challenging than the MC, get an MB for more enormous potentials.

The CB irons see the meeting of forged club-face and cast cavity.

You’ll find the CB line even more forgiving than the MC, as they’re designed for intermediate amateurs.

The Ping I20 are all cast irons.

Thus they offer great feel at impact, but the feedback isn’t so great as forged irons.

Mizuno has also been playing big in the market, delivering quality player’s clubs.

Its MP-54 goes by the slogan: “Step up your shot-making”.

It works perfectly for new players to upgrade their level.

Are they suitable for beginners?

As mentioned above, the MC Irons targets highly-skilled players looking to a professional level.

Though they’re pretty forgiving, it requires some training to get used to the performance.

What are the dimensions of TaylorMade MC Irons?

Do they come with a left-handed version?

Yes. All three series in the Tour Preferred line come with both versions for right-handed and left-handed players.

What is the loft of TaylorMade MC irons?

The MC series is the midpoint of the Tour Preferred product line.

While the MB is for skilled players and CB is for newbies, the MC is ideal for average golfers aiming to be pro.

This golf club is perfect for highly skilled performances yet still forgiving for unwanted hits.

The ingenious combination of forged and cast clubs results in a blend of balance, performance, and ease at use.

Accordingly, TaylorMade MC Irons will be a great help for you to raise your level to a professional tour.

What do you think of our TaylorMade MC Irons review?

Is there anything you think differently or want to add on?

Feel free to share your opinions below for us to discuss.

Hi, I’m Jon Tyson. Welcome to my little golfing site on the Internet! I’m not a professional golfer by trade. However, after 5 years playing golf, I do know a thing or two about this game. And I’d love to share my experiences with you on my site.

Find out more or adjust your settings.

This website uses cookies so that we can provide you with the best user experience possible. Cookie information is stored in your browser and performs functions such as recognising you when you return to our website and helping our team to understand which sections of the website you find most interesting and useful.

Strictly Necessary Cookie should be enabled at all times so that we can save your preferences for cookie settings.

If you disable this cookie, we will not be able to save your preferences. This means that every time you visit this website you will need to enable or disable cookies again.